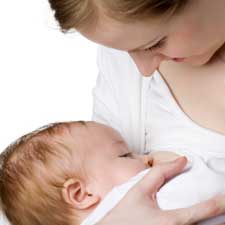 Breastfeeding is one of the best things that you can do for your baby.  The other week we looked at a few ways that the nursing mother benefits from breastfeeding and today we’re going to see the benefits of breastfeeding for the baby.

There really is no substitute for breastmilk.  No matter how hard formula manufacturers try to sell it as such, there is nothing that compares to mother’s milk when it comes to nourishing the baby.  The lactating mother’s body takes it’s cues from the baby and adjusts itself accordingly, and that is something that canned formula cannot do.

Colostrum is the baby’s first food and is produced prior to the baby’s birth as well as during the baby’s first few days of life.  The mother does not produce much of it, which sometimes leads women to think that they are not producing enough for their babies, but rest assured, it is enough.  My husband jokingly referred to it as Momma Yarbrough’s Liquid Gold while I was nursing our newborns (maybe that was too much information, LOL!).  Although colostrum is produced in small amounts, it is concentrated and contains exactly what the baby needs.

After the first few days of the baby’s life, the colostrum transitions to what we think of as traditional breastmilk. At this point the mother’s milk “comes in”.  The mother produces much more of this milk, it is thinner and changes a bit in it’s makeup, providing what the baby needs for continued growth.  There are many benefits from continuing breastfeeding.

I breastfed each of my three children exclusively for 12-14 months.  They have never ingested one ounce of formula.  My first and third would drink my breastmilk from a bottle if I needed to be somewhere when it was time to eat, but my second child would not have  bottle under any circumstance.  This meant that I did not get out much on my own for the first 12-14 months, but I worked around it and it didn’t affect my life in a negative way.  I have always been thankful to be able to feed my children in this way, and let me tell you, it wasn’t always easy, but the benefits of breastfeeding  outweighed the cons at every turn.

I think it’s important for women to know the facts about breastfeeding, and how the baby benefits from nursing, so that they can make an informed decision about how their baby will be fed.  I will never judge a woman for the decision that she makes, but I do think it is very unfortunate when women make decisions based on formula commercials and what their doctors tell them exclusively.  Please take the time to think about the options and educate yourself about breastfeeding and formula feeding… it will be time well spent, I promise you that!